My First Year at Work – a Pandemic Retrospective 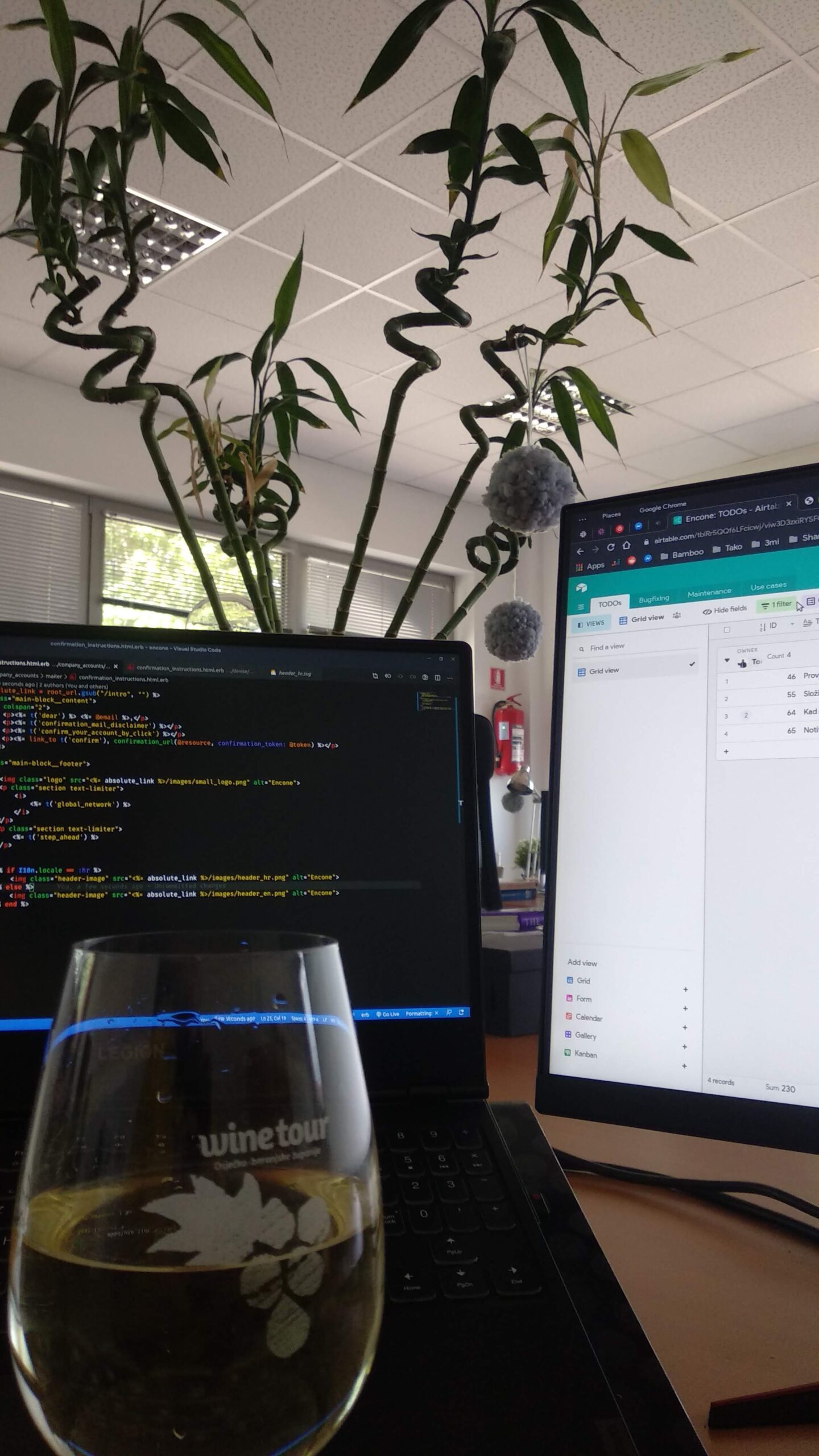 It was mid-September of 2019 when I’ve officially become a Bachelor of Electrical Engineering (with a major in Computer Science, probably there’s a little more on my About page). After the proper celebration and a small rest from three years of university life, it was the time to grow up and find me a job to do. So, that’s what I did, and this is how my first year at work went!

A few years before, while I was enrolling at the university, I’ve got introduced to many different IT terms. First, I’ve started to learn Python and started doing some random apps with it. This whole thing went further when I’ve found out about the MVC pattern and Django.

Besides, my university got me some Java stuff to do, which was an upgrade to my knowledge of C/C++. So, that’s already three languages that I’ve got into just on the first two semesters. I did some more research on Kotlin and Firebase, too.

Getting to the front endpoint of programming

So, how on God’s flat earth have I ended up as the Junior Frontend? Well, it sounds crazy, but 99% of the stuff I’ve learned about frontend came out of my formal education.

HTML, CSS, and a bit of JS are what I knew since high school (back when flexbox/grid were unstandardized). At about the same time, I’ve been using Adobe products at my school (mostly Photoshop and Illustrator, sometimes Premiere and InDesign).

The UI design was still unknown to me until the final year of university when I’ve discovered editors like Adobe XD and Figma, which pumped back up my will to do some frontend stuff that I have drawn. It was just the perfect time, as I’ve had to do a mandatory internship before I finish up my final year.

My first internship was a backend

As my first internship, I didn’t have much choice since my faculty and the companies were required to have a contract for internships. There were only three eligible companies to apply. Two of them were backend, and one of them was frontend. Soooo, I went to the backend side and became an intern at Atos, a multinational company that works a lot of stuff. You can check it out here.

What can be worse than that? The thing that the programming language we need to use is Java! Ugh!

By the way, the company is not that bad, and my colleagues and I did some badass REST API (we were adding food that we were eating at the local fast-food restaurant, the goal was to put everything from the menu, I guess).

The second one was the thing

My faculty organizes Blind Dating on its anniversary day. No, you’re not going there to meet your significant other. Instead, you get a two-minute interview with your potential employer.

I’ve got interested in some internships offered by foreign representatives from other EU countries. However, most of the offers weren’t amusing for me (e.g., telecommunications, embedded systems, etc.).

Between all those companies, there was also one called Bamboo Lab. I don’t remember what we were talking about then, but a few days later and hey – I’ve got an e-mail from Boris, the CEO and the person who interviewed me. It was a simple request for a digital copy of my CV, but that’s how the path towards my first job started.

I’ve got an internship a month after the interview, and I’ve finished it in the next two months. After that, I’ve started doing some real frontend stuff (still as a student). It was the time when I’ve found out some new things like Sass/SCSS, React, and Vue.js (the latter one is my passion now).

Starting my first year at work

At the beginning of March 2020, I’ve signed the contract for my first job and officially became a Junior Frontend Developer. The first two weeks were amazing! A new apartment, one part of the desk (it is a very long desk, by the way), high-quality coffee from a high-quality machine. And then, the virus came!

The announcement came at the very beginning of the pandemic that we are starting to work remotely. Fortunately, the company was ready for it. Most day-to-day communication was already going through Slack, and real-life meets have transformed into Google Meets.

Going remote for some (longer) time

I was unsure what was going on and how long will this “new normal lifestyle” last. So, I’ve decided to continue to work from my rented apartment for two more weeks, hoping this will all end by the end of the month. I’ve replaced one part of the desk with a decades-old dining table, a cooling pad a private computer (since I didn’t have time to get the business one yet). And famous Ikea Markus chair? This one got replaced with an uncomfortable wooden chair made in a country that doesn’t even exist anymore.

After those two weeks, I’ve got some info that the country will go into full lockdown. So, I’ve packed my stuff and decided to head back to my parents for some time. I’ve transformed my cozy man cave into a fully functional remote office (modern furniture included) in two days.

So, that’s how the first month went, and this situation went on for two more months. It looked cool at first, but sleeping and working in the same place got me crazy very soon. In the meantime, the company moved into a new bigger office space in the same building (just across the old one)! As soon as we completed the office moving, we could start working in the office again. It was optional, of course.

Back to the office

Since I was a new guy there, I wanted to meet others more thoroughly than just knowing their names. So, I’ve decided to go back to the office. I’ve got a desk of my own in the new workspace (not only a part of it)! Great success!

Several people started to work also in the office. It was an opportunity for me to start bridging the gap of being unknown and unfamiliar with coworkers – something I was afraid of.

After three months of work under full capacity in the office (often from morning till evening), I’ve started to feel exhausted and frustrated for a bit.

How to light a match in yourself?

It has been six months since I started working. The summer was ending, and we’ve had some celebrations, including two weddings, one team-building event, and I’ve planned myself a one-week trip to the Netherlands in September.

After all of that, I’ve come back to my workplace and did some frontend as same as before. However, it seemed like my job started to exhaust me. I didn’t believe it – my job was my hobby! Programming can’t make me tired!

Sadly, I was wrong. It was the infamous burnout – a small mental breakdown that happened thanks to my crazy brain, who didn’t know when we were out of the working hours. It affected me for two weeks for sure. It seemed like I’ve lost all that passion for the work and doing something new each day. I’ve tried to postpone every possible new thing until I get things straight. And what’s the worst of it? I didn’t know how to get those things straight!

Fortunately, I’ve found out something that really relaxes me and moves me away from computers, and it’s called cooking! It all started with some meals, and it got through some more advanced. I still don’t know how to make something very sophisticated, and I don’t plan to, as I want to keep this new hobby as simple as possible.

What did I learn as a human?

Aside from hard-skilled stuff like Ruby on Rails and Vue, I’ve learned many different soft skills.

First of all, getting a sense of teamwork was the biggest thing for me. Before my employment, I have thought that the team roles in the IT industry were strict. It seemed like that you can be either junior, senior or team leader. In reality, each team member needs to know when to take the exact role and push the project further.

Secondly, don’t be afraid to ask. It is stupid for people to think that you should not use Stack Overflow when you don’t know the answer. Getting stuck on something and not asking your teammates for help is even more stupid. Even if it’s not their field of knowledge, they are likely still able to show you the right way to carry on.

Most importantly, don’t underestimate yourself! Say aloud what you think it’s best. You shouldn’t care if no one agrees with you or if this is the unexpected way to go. In my case, yelling “WE NEED VUE HERE!” several times was enough to get this framework in several projects 🙂

What comes after the first year at work?

A few months ago, I took over the internship program (yes, the same one I was passing through a few months before), and I consider this as high responsibility and a great opportunity.

Other than that, I will always hope that every year new challenges will go after me. I want that each project has a unique design, and by that – a unique frontend solution. The moment I get scared of challenges is the moment I should stop being a developer. Alas, that’s not going to happen, am I right?

Oh, yeah…one ex-stray cat has chosen me as an owner! It was like getting a surprise therapy for an endless workday! Say hi to Joe!

3 thoughts on this Note